A Talk by Mark Bromley, Executive Director of Council for Global Equality
and Scott Long, Visiting Fellow with the Human Rights Program

This event will feature Mark Bromley, Executive Director of the Council for Global Equality, in dialogue with Scott Long, former director of the LGBT Division of Human Rights Watch, and a current Visiting Fellow with the Human Rights Program.

This event is being co-sponsored by HLS Lambda and HLS Advocates for Human Rights. 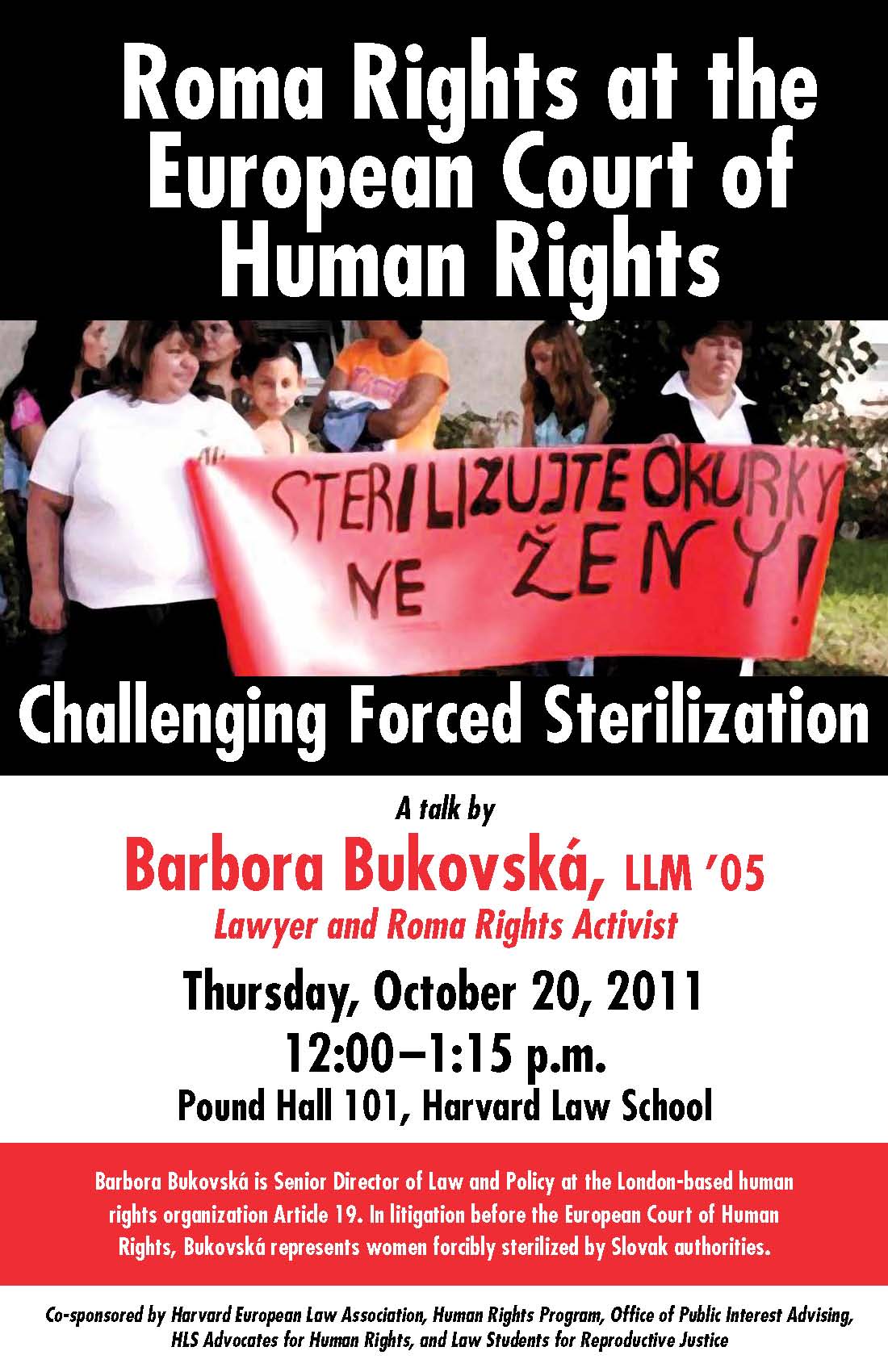 Barbora Bukovská, LLM ’05, is currently Senior Director of Law and Policy at the London-based human rights organization Article 19.  A founder of the Czech Republic’s first legal clinic, in 2001 she founded the Centre for Civil and Human Rights in Kosice, Slovakia, where she led efforts to eliminate the practice of forced sterilization of Roma women in Slovakia, as well as other human rights abuses.  She is currently representing a group of Roma women who were forcibly sterilized by Slovak authorities in a case before the European Court of Human Rights.

This event is being co-sponsored by the Harvard European Law Association, the Office of Public Interest Advising, HLS Advocates for Human Rights, and Harvard Law Students for Reproductive Justice. The Supreme Court announced today that it will hear arguments in Kiobel v. Royal Dutch Petroleum Co., an Alien Tort Statute (ATS) case that squarely presents the question of whether corporate liability exists under the statute.  Since June, when the plaintiffs in Kiobel filed their petition for certiorari, there have been significant developments around the question of corporate ATS liability as two courts of appeals rejected the Kiobel position.  In taking the case, the Supreme Court should resolve this split in the lower courts.  The hearing will be during the 2011-2012 term, and a decision can be expected by June 2012.  Kiobel involves allegations against Royal Dutch/Shell for its complicity in egregious human rights violations, such as extrajudicial killings, in the mid-1990s in Nigeria.  Of note, the Court combined argument in Kiobel with Mohamad v. Rajoub, which poses the question of whether corporations may be held liable under the Torture Victim Protection Act (TVPA). “Accountability After Katrina: Community Lawyering and Organizing for Justice”

Join us for a discussion about the ways in which community organizers and lawyers are working together to address justice issues in New Orleans.  Norris Henderson is a community leader and the Founder and Executive Director of  Voice of the Ex-Offender (VOTE), a non-profit justice organization founded by and run by formerly incarcerated people.  Davida Finger, a former Wasserstein Fellow at Harvard Law School, teaches the Community Justice Clinic at Loyola University New Orleans College of Law. END_OF_DOCUMENT_TOKEN_TO_BE_REPLACED

Interesting development this week from the Human Rights Council: it has adopted a resolution to appoint, for a period of three years, a new Special Rapporteur on promotion of truth, justice, reparation, and guarantees of non-recurrence of serious crimes and gross violations of human rights.

The Special Rapporteur’s mandate will include gathering relevant information on national situations, practices, and experiences, as well as normative frameworks, related to transitional justice mechanisms.  The Special Rapporteur will also be tasked with providing technical assistance upon request, exchanging and promoting good practices, and recommending strategies to address grave human rights abuses and serious crimes.  The resolution calls for survivor-centered approaches and the incorporation of gender-sensitive perspectives.

The resolution received wide support, as it was co-sponsored by more than 75 countries.  The Council requested the Special Rapporteur report annually to the Human Rights Council and the General Assembly.