Last week in South Africa, there was an important—and surprising—development related to the 1983 torture and murder of Nokuthula Simelane.  I previously wrote about the case as an egregious example of the lack of accountability for apartheid-era crimes, as well as the apparent political obstruction that effectively blocked the investigation and prosecution of nearly 300 post-Truth and Reconciliation Commission (TRC) cases.

But perhaps the tide is turning.  On February 8th, the National Prosecuting Authority (NPA) announced that it will charge four former apartheid security policemen with Simelane’s kidnapping and murder.  This represents the first prosecution of apartheid-era perpetrators since a 2007 plea agreement with five senior police officers, among them Adriaan Vlock, who served as Minister of Law and Order.

Former TRC Chairman Archbishop Desmond Tutu described the breakthrough as a “most significant and historic decision,” but also questioned why the NPA delayed for decades and proceeded only after Simelane’s family launched a High Court case to compel the NPA into action.  The NPA has said that it is moving ahead now because of the strength of the evidence and merits of the case, which create reasonable prospects of a successful prosecution.

The four former members of the Soweto Special Branch—Willem Helm Johannes Coetzee, Anton Pretorius, Frederick Barnard Mong, and Msebenzi Radebe—are due to appear in court on February 26th.  Although three of the accused applied to and received amnesty from the TRC for Simelane’s abduction, none applied for her murder.  Because of this failure to make a full disclosure, the case was referred to the NPA and now appears set to proceed.

The Clinic and its partners today filed a petition for writ of certiorari with the U.S. Supreme Court in the In re South African Apartheid Litigation suit, asking the Court to clarify the circumstances under which defendants may be held accountable in U.S. courts for human rights violations. The case, which involves the actions of U.S. corporations IBM and Ford, raises questions about whether a defendant’s knowledge is sufficient to establish aiding and abetting liability, or whether specific intent or motive must also be demonstrated. It also concerns how closely a human rights violation must be connected to the United States in order to sue under the Alien Tort Statute (ATS), and whether corporations can be held liable at all under the ATS.

The petition argues that through their actions, and decades-long support for violations associated with apartheid, defendants IBM and Ford purposefully facilitated violations of international law by enabling the “denationalization and violent suppression, including extrajudicial killings, of black South Africans living under the apartheid regime.” According to the petition, “IBM and Ford purposefully designed, sold, and serviced customized technology and vehicles for the South African government that they knew in advance would be used to racially segregate and systematically oppress black South Africans.”

Despite the corporations’ knowledge and deliberate action, in 2015 the Second Circuit concluded that IBM did not aid and abet international law violations because there was no evidence that “IBM’s purpose was to denationalize black South Africans and further the aims of a brutal regime.” In an equally striking 2011 decision, the Fourth Circuit imposed an aiding and abetting standard requiring defendants who supplied mustard gas to Saddam Hussein’s Iraqi regime to not just know but rather intend that it be used against civilians.

END_OF_DOCUMENT_TOKEN_TO_BE_REPLACED

Due to a snowstorm, the event below has been cancelled.

Please join us for a talk by Professors Howard Kyongju Koh and Harold Hongju Koh regarding the battle for global tobacco control and what we as concerned global citizens should do.

Howard Kyongju Koh MD, MPH is Harvey V. Fineberg Professor of the Practice of Public Health Leadership at the Harvard T.H. Chan School of Public Health and Harvard Kennedy School and most recently served as Assistant Secretary for Health in the Obama Administration. Harold Hongju Koh J.D. is Sterling Professor of International Law and formerly Dean of Yale Law School and most recently served as Legal Adviser of the State Department in the Obama Administration.

This is their first joint public lecture.

In Thanks and Tribute to Mindy Jane Roseman

The Human Rights Program expresses its gratitude and appreciation to our departing Academic Director, Mindy Jane Roseman, as she takes up new responsibilities at Yale Law School.  In her decade at HRP, she has contributed in innumerable, crucial ways to the intellectual, institutional, and communal life of HRP.  We thank her for all her achievements here, and warmly wish her great success in her new role. 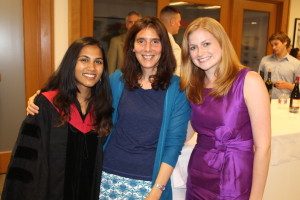