Typically, fellows come from outside the U.S., and spend from one semester to a full academic year in residence at Harvard Law School, where they devote the majority of their time to research and writing on a human rights topic. The Program currently has a preference for fellows working on the United Nations Treaty Bodies in their research, though applications are not limited in this regard.

The fellows form an essential part of the human rights community at Harvard Law School, and participate in the Human Rights Program’s bi-monthly Visiting Fellows Colloquium, as well as a number of other activities.

The Human Rights Program provides approximately four fellows annually with a shared office space, access to computers, and use of the Harvard library system. As a general matter, the Human Rights Program does not fund fellows. However, applicants who are nationals of low or middle income countries are eligible for the Eleanor Roosevelt Fellowship, which offers a stipend to help defray the cost of living.  In order to profit from the fellowship, fluent spoken English is essential.

The deadline to submit applications is February 1, 2017.

Monday, Nov. 21: “Protest and Social Media: A Conversation with Evan Mawarire of the #ThisFlag Movement

A conversation with Evan Mawarire,
of the #ThisFlag movement

Please join us for a discussion with Zimbabwean pastor Evan Mawarire, of the #ThisFlag movement, as he examines the protests that swept across the nation and diaspora, calling for economic reform, restoration of basic services and an end to government repression in Zimbabwe. Mawarire, whose social media campaign helped to catalyze thousands of protestors, was later detained and charged with “attempting to overthrow the government.” He was quickly released after a magistrate ruled his arrest unconstitutional.

This talk is being co-sponsored by the Harvard African Law Association at Harvard Law School. Harvard ID is required. Lunch will be provided.

Wednesday, Nov. 16: “The Future of the Inter-American System” 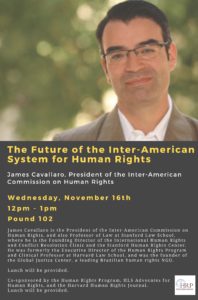 “The Future of the Inter-American System”

Tomorrow, Nov. 15: “Women’s Legal Capacity in the Laws of Saudi Arabia and the Gulf States”

Please join us for a talk by Saudi blogger and activist Hala Aldosari, who will discuss the family laws of Arab Gulf states and the challenges and prospects of change.  She will focus on women’s legal capacity under these laws and discuss the current debates and controversies surrounding Islam, social customs, and legal reform in these countries.

A scholar of women’s social determinants of health, Aldosari is currently a visiting scholar at the Arab Gulf States Institute in Washington DC, where she researches gender identity in the laws and policies in Saudi Arabia and the Gulf States.  She maintains a women rights advocacy project online and participates in advocacy efforts and community capacity building aimed at promoting women’s rights.

This talk is being presented by Islamic Legal Studies: Law and Social Change and co-sponsored by the Human Rights Program

Please join us for a book talk by Alexis Demirdjian, who will discuss law and the Armenian Genocide, including judicial explanations and legal remedies. The talk will be moderated by Prof. Alex Whiting of Harvard Law School.

Please join us for a discussion with Nani Jansen Reventlow on the topic of regional courts in Africa and freedom of expression cases in particular. As the head of the Media Legal Defence Initiative’s global litigation practice, Reventlow led litigation that resulted in the first freedom of expression judgments at the African Court on Human and Peoples’ Rights and the East African Court of Justice. She has also led cases before the European Court of Human Rights, the UN Human Rights Committee, the UN Working Group on Arbitrary Detention, and several African regional courts.

This event is co-sponsored by the Human Rights Program, the Berkman Klein Center for Internet & Society, and HLS Advocates for Human Rights.