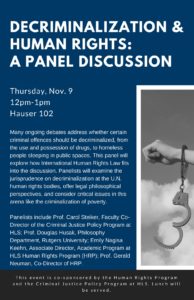 Many ongoing debates address whether certain criminal offences should be decriminalized, from the use and possession of drugs, to homeless people sleeping in public spaces. This panel will explore how International Human Rights Law fits into the discussion. Panelists will examine the jurisprudence on decriminalization at the U.N. human rights bodies, offer legal philosophical perspectives, and consider critical issues in this arena like the criminalization of poverty.

This event is co-sponsored by the Human Rights Program and the Criminal Justice Policy Program at HLS. In a statement released today, more than 35 student groups at Harvard Law School responded to a racially charged incident on campus last week. In solidarity, we reprint their statement below about what appears to have been a coordinated campaign:

On the evening of October 31, stickers with the words, “IT’S OKAY TO BE WHITE,” were posted around the entrance of WCC. Similar stickers appeared around Cambridge and other parts of the United States and Canada. According to an online forum, the stickers were intended to convey a “harmless” message that would leave “the media & leftists frothing at the mouth” and turn public opinion against them.

We condemn this attempt to divide us along the lines of race and politics. Instead, we have come together as law student groups representing individuals of many backgrounds and identities. We emphatically assert that we remain committed to maintaining a community where we respect and embrace our differences.

The stickers’ message may seem innocuous, but it ignores a national history replete with discrimination against underrepresented groups and implies that promoting equality threatens white people. Equality is not a zero-sum game.

Coming together today, the undersigned organizations affirm our belief that “it’s okay” to be whoever you are and to aspire to grow into whoever you want to become. We welcome people to our community irrespective of background or identity.

With love and support,