Humble, hilarious, and altogether inspiring, Ben became Chief Prosecutor in the Einsatzgruppen case at the Nuremberg Tribunal at the age of 27- and has been a tireless advocate for peace ever since.

After his talk, titled “Law not War,” students surrounded Ben with requests to pose for pictures. He greeted one student this way: “Where you from? Want to help me save the world?” 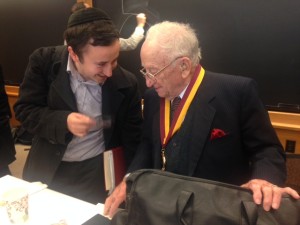