When considering actors within international criminal tribunals, judges, prosecutors and defense attorneys readily come to mind. Often overlooked figures are legal officers working in Judges Chambers. Legal officers play a vital role in assisting investigations, managing pre-trial dockets, and drafting judgments. Priyanka Chirimar, Visiting Fellow at the Human Rights Program and OPIA Wasserstein Fellow-in-Residence, has served as a legal officer for the International Criminal Tribunal for the Former Yugoslavia, the Special Court for Sierra Leone, and the Extraordinary Chambers in the Courts of Cambodia. She will discuss legal officers’ core duties, ethical obligations and challenges, and their role in norm building.

Sponsored by the Human Rights Program and the Office of Public Interest Advising.

Tomorrow, April 12: Human Rights in the Council of Europe and the European Union

Human Rights in the Council of Europe and the European Union

Dr. Steven Greer, Professor of Human Rights at the University of Bristol Law School, will discuss his new book, which examines the complex regional arrangements in Europe for the protection of human rights, where bodies of the European Union and the larger Council of Europe interact both as partners and competitors.  He and his co-authors show how the institutionalization of human rights has contributed to securing minimum standards across Europe.  They consider the central challenges to these institutions and how they could be managed, particularly for the U.K. in the post-Brexit era. Professor Greer will be joined by his co-authors, Professor Janneke Gerards from Utrecht University School of Law, and Rosie Slowe, Senior Research Fellow at the University of Bristol Law School. Tomorrow, April 10: The Inter-American Court of Human Rights and the Protection of LGBTQI Rights Please join HLS Lambda for a discussion with Ana Helena Chacón, Vice President of Costa Rica, on the landmark Advisory Opinion 24 issued last January by the Inter-American Court of Human Rights regarding same-sex marriage and transgender rights. The Court resolved that same-sex couples should be recognized and guaranteed “all the rights that are derived from a family bond between people of the same sex” and that governments must guarantee access “to all existing forms of domestic legal systems, including the right to marriage, in order to ensure the protection of all the rights of families formed by same-sex couples without discrimination.” The Opinion sets precedent for 19 other Latin American and Caribbean countries that have agreed to abide by the Court’s decisions.

In addition to being the Vice President of Costa Rica, Madame Chacón acted as the Representative of Costa Rica in the case before the Inter-American Court and is globally recognized as a vocal champion for LGBT rights.

This event is being co-sponsored by La Alianza and the Harvard Women’s Law Association.

Please join the South Asian Law Students Association, the International Human Rights Clinic, and HLS Advocates for Human Rights for “The World’s Oldest Form of Existing Discrimination,” a talk with Dr. Suraj Yengde, a Human Rights lawyer and Non-Resident Fellow at the W.E.B Du Bois Institute at the Hutchins Center at Harvard University. Dr. Yengde will discuss the ongoing ramifications of the caste system in contemporary India, with specific attention paid to the failure of international institutions and the international community to effectively condemn caste. Dr. Yengde’s talk will additionally touch on the role of colonialism in perpetuating anti-Dalit oppression in India, as well as the ways in which law students and lawyers can effectively combat caste-based discrimination.

Tomorrow, April 3: International Religious Freedom in an Age of Nationalism 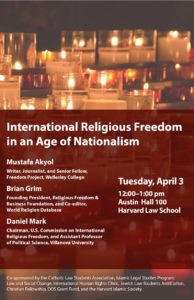 “International Religious Freedom in an Age of Nationalism”

Please join us for a discussion with Mustafa Akyol , author of “Islam Without Extremes: and Senior Fellow at the Freedom Project at Wellesley College; Brian Grim, founding President of the Religious Freedom & Business Foundation, and Co-editor of the World Religion Database; and Daniel Mark , Chairman of the U.S. Commission on International Religious Freedom, Assistant Professor of Political Science at Villanova University. 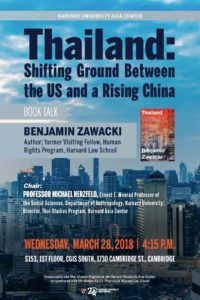 “Thailand: Shifting Ground Between the US and China”

This talk is being sponsored by the Thai Studies Program at the Asia Center, and co-sponsored by HRP. The U.S. in Yemen: What We Know, What We Don’t, and What That Means for Rights Protection

The war in Yemen has been marred by frequent violations of the laws of war by all parties to the conflict, and a humanitarian crisis that has left millions at risk of famine and continuing cholera and diphtheria epidemics.  The United States is intimately engaged in this conflict, providing significant support to the Saudi-led coalition military campaign, carrying out unilateral strikes, and working in partnership with the UAE to counter Al-Qaeda. However, a lack of transparency about the ways in which the US is engaging in Yemen frustrates advocacy and accountability efforts.

This talk by Kristine Beckerle, Yemen and UAE Researcher, Human Rights Watch, will examine the US role in Yemen and explore the legal and policy avenues through which rights advocates can push for rights-respecting policies and practices, both in the context of Yemen as well as counter-terror efforts in the MENA region more broadly.

Hosted by the Islamic Legal Studies Program: Law and Social Change and co-sponsored by the Human Rights Program, the Middle Eastern Law Students Association, and HLS Advocates for Human Rights. Lunch will be served.

Conference preview: Gerald L. Neuman on “Human Rights in a Time of Populism” The conference, which is free and open to the public, takes place this Friday afternoon and Saturday all day on Harvard Law School’s campus.

So Professor, to start us out: What is this conference about?

We don’t expect the answers to these questions to be the same for every country, and that’s one of the things we’re going to be discussing.

We’ll have more than a dozen leading experts coming from as far away as The Philippines and as near as our own university. There will be specific discussion on the United States, Poland, Southeast Asia, Turkey, and Latin America, as well as cross-cutting themes.

I should clarify what I mean by populism. Political scientists offer different formulations for the notion of populism, as we’ll be discussing. The phenomenon of concern here is a kind of politics that employs an exclusionary notion of the people- the “real people,” as opposed to disfavored groups that are unworthy. Populist leaders then claim to rule on behalf of the “real people,” whose will should not be constrained.

And does this populism affect internationally protected human rights?

We plan to discuss examples of how that happens. But the easy answer is: Yes, it does. Certainly within the country, and it in cases it has implications for other countries as well. If we look internally, often populism then leads to targeting the excluded groups. But it also poses a danger to the majority. Populists deny the legitimacy of the political opposition. They often try to entrench themselves in power and undermine checks. Populism can tip over into authoritarianism.

We’re talking about examples in Poland, Duterte in the Philippines, and of course, President Trump here. END_OF_DOCUMENT_TOKEN_TO_BE_REPLACED

Earlier this month, we welcomed Carol Sanger, Visiting Professor at HLS and Barbara Aronstein Black Professor of Law at Columbia Law School, and Mindy Roseman, Director of International Programs and Director of the Gruber Program for Global Justice and Women’s Rights at Yale Law School, for a timely and compelling conversation about human rights and the criminal punishment of abortion. Below is the full audio of their conversation.