TODAY: Screening and Discussion of “No Más Bebés”

A Film Screening and Discussion with Renee Tajima-Peña

The event is free and open to the public, but registration is required here. 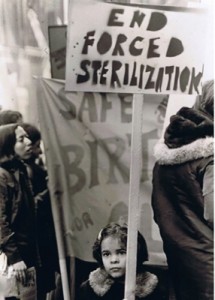 Please join us for a film screening and discussion of No Más Bebés, which tells the story of a landmark event in reproductive justice, when a small group of Mexican immigrant women sued county doctors, the state, and the U.S. government after they were pushed into sterilizations while giving birth at the Los Angeles County-USC Medical Center during the 1960s and 70s.

This screening will be followed by a discussion with Harvard University alumnus and Director, Renee Tajima-Peña. Professor Tajima-Peña is an Academy Award®-nominated filmmaker whose films on immigration, race and social issues include Who Killed Vincent Chin?, My America…or Honk if You Love Buddha, Labor Women, The New Americans, and Calavera Highway. She is currently the Director of the Center of EthnoCommunications at UCLA, where she is a professor and holds an endowed chair in Japanese American Studies.

This event was organized by the Asian American Studies Working Group and the Latina/o Studies Working Group in EMR, and co-sponsored by Observatory of the Instituto Cervantes, The Human Rights Program at Harvard Law School, Committee on Degrees in Studies of Women, Gender, and Sexuality, The Latino Medical Student Association, and The Harvard Chan Women, Gender and Health Interdisciplinary Concentration