A talk by Ziba Mir-Hosseini, Founding Member, Musawah Global Movement for Equality and Justice in the Muslim Family

Please join us for a talk by Ziba Mir-Hosseini, a leading scholar of Islamic feminism. She will discuss the emerging reformist and feminist voices in Islam and their potential in challenging the long-established classical interpretations of Shari’a and rethinking their underlying patriarchal ethical values and norms, with a particular emphasis on the pioneering work of Musawah, a global movement for equality and justice in the Muslim family. This event is co-sponsored with the Islamic Legal Studies Program: Law and Social Change. Vegan lunch will be served.

Facebook Live Conversation: On the Rohingya Crisis and its Long-Term Implications for Myanmar

Yesterday the International Human Rights Clinic livestreamed on Facebook a conversation about the Rohingya crisis and its long-term implications for Myanmar. It was the first in a series of conversations we plan to livestream on critical topics in the world of human rights. Tarek Zeidan, HKS ’18, moderated the discussion between Yee Htun, clinical instructor and former director of the Myanmar Program for Justice Trust, and Tyler Giannini, the Clinic’s co-director and co-founder of EarthRights International, who lived and worked on the Thai-Burmese border for a decade. You can watch the conversation on our FB page.

Tomorrow, Friday, Sept. 22: In Pursuit of Accountability for Post-9/11 Torture

“In Pursuit of Accountability for Post-9/11 Torture: A Discussion with the Litigation Team of Salim v. Mitchell”

Please join us for a discussion with the litigation team behind Salim et al. v. Mitchell et al., the landmark case that sought to hold CIA-contracted psychologists Dr. Bruce Jessen and Dr. James Mitchell accountable for the post-9/11 torture program they devised. Hina Shamsi, director of the ACLU National Security Project, and Lawrence Lustberg, chair of the Criminal Defense division at Gibbons Law in Newark, NJ, will discuss the recently settled case with moderator Paul Hoffman, a civil and human rights attorney and fellow member of the trial team currently teaching at HLS. The ACLU filed the lawsuit under the Alien Tort Statute on behalf of three victims of the CIA’s program, Mohammed Ben Soud, Suleiman Salim, and Gul Rahman, who died as a result of the torture inflicted on him.

Tomorrow, Sept. 19: Freedom of Expression and LGBTI Eqaulity in Jamaica 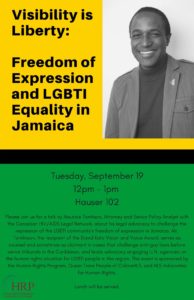 “Freedom of Expression and LGBTI Equality in Jamaica”

Please join us for a talk by Maurice Tomlison, Attorney and Senior Policy Analyst with the Canadian HIV/AIDS Legal Network, about his legal advocacy to challenge the repression of the LGBTI community’s freedom of expression in Jamaica. Mr. Tomlinson, the recipient of the David Kato Vision and Voice Award, serves as counsel and sometimes as claimant in cases that challenge anti-gay laws before senior tribunals in the Caribbean, and leads advocacy engaging U.N. agencies on the human rights situation for LGBTI people in the region. He also documents and reports on human rights abuses, and conducts training and capacity-building for the judiciary and police.

This event is sponsored by the Human Rights Program, Queer Trans People of [email protected], HLS Lambda, and HLS Advocates for Human Rights.

Now that the semester is underway, we want to extend our warmest welcome to all of the new staff and Visiting Fellows at the Human Rights Program. They are, in a word, fantastic.

Debbie Frempong, the new Program Assistant for the International Human Rights Clinic, comes to us from Harvard Divinity School, where she graduated with an MTS in Religion, Politics and Ethics. She holds a B.A. in Public Policy and Politics from Pomona College. Debbie is taking on many of the responsibilities previously held by Katherine Young, who until recently worked as Program Associate. This summer, she was promoted to Program Manager, in charge of administrative management of the International Human Rights Clinic and the financial administration of the Human Rights Program.

Statement in Solidarity with Lambda and QTPOC on JAG Recruiting

As human rights advocates, we support the student groups Lambda and QTPOC (Queer and Trans People of Color) in their action today against Harvard Law School’s decision to allow JAG recruiting on campus, which is the school’s only exception to its anti-discrimination policy. We also support the students’ call for increased support and awareness for issues affecting the transgender, non-binary and gender non-conforming community. We stand in solidarity with the students, staff and faculty seeking to build a more inclusive Harvard Law School. Student action outside the classrooms where JAG was recruiting today.

Moving On: Gabriela Gonzalez Follett to Explore the World

Yesterday, when we converged on Harvard’s campus to protest the end of DACA—when we listened to stories of pain and resistance; when we snapped our support; when we linked our arms, and chanted together, several hundred strong—one person was missing.

That person was Gabriela Gonzalez Follett, who never missed a fight for the rights of other people in her three years with us, first as Program Assistant, and later Program Coordinator. She left HLS last Friday, headed to teach English to children in a small Spanish town.

We could say that Gabriela was superb at her job, and it would be true. She organized nearly 100 events in her three years at the Human Rights Program, including conferences on everything from the role of African women in the post-2015 Development Agenda to climate change displacement and human rights. She became a master of managing the moving parts: speakers flying in from around the globe, last-minute technical breakdowns, calming the community’s fraying nerves.

On a daily basis, she supported the ever-changing needs of several clinical instructors; the staff of the Academic program; the Visiting Fellows; and hundreds of students seeking guidance on everything from the fellowship process to clerkship letters.

But now that Gabriela has officially left HRP, her job performance is not what many of us will remember.

We will remember her power. In her speech on Class Day 2016, Gabriela Gonzalez Follett, described her mother, Nohra, as having wisdom, power and magic that others did not always see.

Like so many great stories, Gabriela’s has an arc. By her own telling, she came to Harvard Law School intimidated, feeling less than the sum of her considerable parts. But she pushed past that feeling, followed her curiosity, and sat in on clinical seminars, collecting all the knowledge she could.

Then, when a crisis point came—the non-indictment of a white police officer, Darren Wilson, who shot and killed Michael Brown, an unarmed black teenager, in Ferguson, Missouri—Gabriela quickly rose to meet the need. She reached out to students of color—not just as a friendly face in the office, but as a friend. In public and in private, on the job and off, she showed up in ways that went late into the night, and made others feel less alone.

One of those students, Keaton Allen-Gessesse, JD ’16, returned the favor nearly a year later, when the community gathered yet again to discuss racial equity on campus, in the aftermath of someone—or some people—defacing the portraits of black professors. In her comments, Keaton used her privilege as a student to raise concerns about the treatment of staff of color, a community that had gone overlooked in the discussion to that point.

Gabriela, inspired, rose to represent. She spoke about her own experience as a woman of color on campus—about the stereotypes that flew around her, and at her, and about the differences in the way she saw staff or color treated. When she finished speaking, she had become a leader in what became Reclaim Harvard Law School, a movement of students and staff pushing for institutional change and racial equity in education.

Gabriela spent the next several months strengthening the ties between students of color and staff of color while working tirelessly for the movement overall. At nights and on weekends, she sat through hours-long meetings, helping to substantively shape the content of the movement’s demands and manifesto. She hosted workshops; led art-actions; wrote an Op-Ed; coordinated critical email lists; spoke at community forums. She organized “family dinners” for staff of color. She slept overnight with the students in Belinda Hall, the student lounge the movement renamed in honor of Belinda Sutton, a former slave of HLS benefactor Isaac Royall.

And so it was that, less than two years into her time at HLS, Gabriela received the ultimate honor from HLS students: their Suzanne L. Richardson Staff Appreciation Award. (See video of her speech below.)

Gabriela would continue to support the Reclaim movement in ways small and large, right up until the day she left HLS. But it is hard to shake the power of her image on Class Day, rising to speak, and draping the traditional cloth from her mother’s homeland over the dais before she began—a woman completely at home, and entirely her own.

Thank you for the inspiration, Gabbie—and for the many gifts you brought to our door.

For more on the decades-old racial justice movement at HLS, see this timeline. For selected coverage of the recent movement, including Op-Eds by students, staff and faculty, see here.