Monday, Jan. 29: HIV and the Criminalization of Sickness “Punishing Disease: HIV and the Criminalization of Sickness”

Please join us for a talk with Trevor Hoppe, Assistant Professor of Sociology at the University at Albany, SUNY, on his book, Punishing Disease: HIV and the criminalization of sickness. The book examines how and why U.S. policymakers and public health systems have adopted coercive and punitive responses to stop the spread of HIV/AIDS. It also looks at how others diseases have been punished throughout history, and cautions against the extension of criminalization to diseases such as hepatitis and meningitis.

This talk is part of the Human Rights Program’s year-long speaker series examining the criminalization of human rights concerning gender, sexuality, and reproduction. The event is co-sponsored by the Petrie-Flom Center for Health Law, Policy, Biotechnology and Bioethics, the Center for Health Law and Policy Innovation, and the Criminal Justice Policy Program.

Tomorrow, Nov. 10: Addressing the Harms and Curbing the Use of Armed Drones; LGBTQ Rights in the Arab World

Please join us for a brown bag informal lunch discussion with Elizabeth Minor, an Advisor at UK-based disarmament NGO Article 36. Minor will explore the current state of international action by states and NGOs to address the concerns raised by armed drones. She will also discuss the need to work towards agreement on the limits of the acceptable use of these technologies in order to respond to the harm they cause.

Minor is a researcher and campaigner who has worked for eight years with NGOs and in international coalitions, undertaking policy analysis and advocacy to address armed violence and harm from certain weapons. Most recently with Article 36 she worked to achieve the Treaty on the Prohibition of Nuclear Weapons with the International Campaign to Abolish Nuclear Weapons (ICAN), which was recently awarded the Nobel Peace Prize for 2017.

This event is part of the International Human Rights Clinic’s work on armed conflict and civilian protection.

This event is open to Harvard Law School affiliates only

Over the past ten years, new battle lines have begun to form in much of the Arab world. Quietly, slowly, but firmly, LGBTQ activists across the region have begun to resist the legacy of decades of injustice and discrimination against them visibly and vocally by organizing their ranks and embarking on brave acts of resistance.

This panel will examine the cultural and sociopolitical origins and dynamics of homophobia and transphobia in the Arab world and engage in an open and honest conversation about what queer liberation would look like in this complex region. Panelists will draw on their own experiences as activists and debate solutions to dismantle the existing structures of oppression in a number of contexts, including Lebanon, Tunisia, Egypt, and Palestine.

This event is co-sponsored by Lambda, HLS Advocates, MELSA, and the Human Rights Progam, all at Harvard Law School.

Statement in Solidarity with Lambda and QTPOC on JAG Recruiting

As human rights advocates, we support the student groups Lambda and QTPOC (Queer and Trans People of Color) in their action today against Harvard Law School’s decision to allow JAG recruiting on campus, which is the school’s only exception to its anti-discrimination policy. We also support the students’ call for increased support and awareness for issues affecting the transgender, non-binary and gender non-conforming community. We stand in solidarity with the students, staff and faculty seeking to build a more inclusive Harvard Law School. Student action outside the classrooms where JAG was recruiting today. 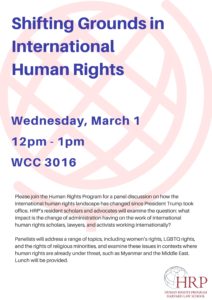 Please join the Human Rights Program for a panel discussion on how the international human rights landscape has changed since President Trump took office. HRP’s resident scholars and advocates will examine the question: what impact is the change of administration having on the work of international human rights scholars, lawyers, and activists working internationally? Panelists will address a range of topics, including women’s rights, LGBTQI rights, and the rights of religious minorities, and examine these issues in contexts where human rights are already under threat, such as Myanmar and the Middle East.

Tomorrow: “After Roe: The Lost History of the Abortion Debate”

“After Roe: The Lost History of the Abortion Debate”

Please join us for a book talk with Prof. Mary Ziegler, Stearns Weaver Miller Professor of Law at Florida State University College, for a discussion of After Roe: The Lost History of The Abortion Debate (Harvard University Press, 2015). After Roe uses more than 100 oral history interviews and extensive archival research to challenge the conventional legal and historical account of social-movement reactions to Roe v. Wade. In studying the decade after Roe, the project explores reasons for the contemporary polarization of the abortion wars. Prof. Ziegler is a 2007 graduate of Harvard Law School.

Co-sponsored by HLS Law Students for Reproductive Justice. Books will be available for purchase.

Earlier this week, Australian radio interviewed Tyler Giannini about a significant development in the world of business and human rights: one of the world’s largest mining companies, Barrick Gold, recently settled claims with a group of women in Papua New Guinea who were raped by the company’s security guards. The settlement, negotiated by EarthRights International, came as the women were preparing to file suit.

The International Human Rights Clinic has been investigating abuses around the Porgera mine for several years, along with NYU’s Global Justice Clinic and Columbia’s Human Rights Clinic. Reports of rape around the mine in the highlands of Papua New Guinea date back to at least 2006, but the company did not acknowledge them for years.

In 2012, the company set up a complaint mechanism, which Tyler describes in the interview as inadequate. Initially, the company was preparing to offer the women who stepped forward a compensation package of used clothing and chickens. At the urging of advocates, including the Clinic, the company later revised its offer, and more than 100 women accepted the settlement.

EarthRights represented a group that did not agree to settle through the company’s complaint mechanism. At least one woman described the original settlement offers as “offensive.”

“If you have settlements that aren’t really getting to justice, the discourse with the community is not really healed, and you don’t get real reconciliation,” Tyler said in the interview. “That’s not good for the company, that’s not good for the survivors, and I think that’s one of the lessons that needs to be taken away.”

In a long-awaited decision today, Namibia’s Supreme Court found that the government forcibly sterilized women living with HIV/AIDS. The ruling upholds the 2012 High Court’s decision in Government of the Republic of Namibia v LM and Others.

Below, we’ve re-posted a press release from the Namibian Women’s Health Network (one of the International Human Rights Clinic’s partners) and the South Africa Litigation Centre, one of the legal partners on the case. While there may be much to cheer about in the decision, the Supreme Court’s affirmation that no evidence of discriminatory animus on the basis of HIV status still disappoints.

In 2010, the Clinic teamed up with the Namibian Women’s Health Network and Northeastern University School of Law to document the full range of discriminatory treatment that women living with HIV/AIDS face in seeking and receiving health care. Forcible sterilization was one of the many human rights violations HIV positive women suffered. Our report, “At the Hospital There Are No Human Rights,” was issued in July 2012.

“This decision by the country’s highest court is a victory for all HIV-positive women as it makes clear that public hospitals in Namibia have been coercively sterilising HIV-positive women without their consent,” stated Jennifer Gatsi Mallet, Director of Namibian Women’s Health Network (NWHN). “However, these three women are only the tip of the iceberg. We have documented dozens of cases of other HIV-positive women who have been forcibly sterilised. The government needs to take active steps to ensure all women subjected to this unlawful practice get redress,” added Gatsi Mallet.

The Supreme Court’s decision in Government of the Republic of Namibia v LM and Others affirmed the High Court’s July 2012 order finding that the government had subjected women to coercive sterilisation. The case was brought by three HIV-positive women who were subjected to sterilisation without their informed consent in public hospitals. The High Court found in favour of the women and held that the practice of coerced sterilisation violated the women’s legal rights.

“This decision has far-reaching consequences not only for HIV-positive women in Namibia but for the dozens of HIV-positive women throughout Africa who have been forcibly sterilised,” said Priti Patel, Deputy Director of the Southern Africa Litigation Centre. “This decision sends a clear message that governments throughout Africa must take concrete actions to end this practice,” said Patel.

NWHN first began documenting cases of forced sterilisation in 2007. Since then, dozens of HIV-positive women in Namibia and in other countries in Africa have come forward describing similar experiences at public hospitals. Despite numerous requests to the Deputy Minister of Health and Social Services in Namibia, very little action has been taken to address this practice.

The three women at the centre of the case were represented by lawyers from the Legal Assistance Centre and supported by the Namibian Women’s Health Network and the Southern Africa Litigation Centre.