The International Human Rights Clinic at Harvard Law School seeks an experienced practitioner for a consultancy to support an exciting new women’s leadership initiative.  The purpose of this new initiative is to innovate and experiment with programming and training that: (1) better prepares women graduates of our Clinic to become successful leaders in human rights, thereby increasing the share of leadership positions in human rights that are occupied by women, and (2) better prepares all graduates of our Clinic to engage with tough questions and conversations around gender, equity, and leadership in the workplace.

Although the Clinic has historically worked on numerous women’s rights issues, we have not grappled with how to best develop our own students into leaders who can advance workplace equity and improve workplace culture.  This initiative will examine the role of women as leaders in the human rights movement to date—both their successes and challenges—and will also seek to build students’ leadership skills, support the Clinic as an environment that nurtures women’s achievement, and engage human rights organizations and institutions to better enable women to fulfill their potential. END_OF_DOCUMENT_TOKEN_TO_BE_REPLACED

This month, the Musawah Movement for Equality in the Muslim Family submitted a thematic report to the Convention on the Elimination of all Forms of Discrimination Against Women (CEDAW) Committee advocating for codification of family law provisions to protect the rights of Muslim women in Mauritius. International Human Rights Clinic students Samantha Lint JD’20 and Natalie McCauley JD’19 contributed to drafting the report and developing its legal recommendations, working in close collaboration with Mauritian attorney and family law expert, Narghis Bundhun.

As the report notes, a major cause of the lack of rights protection and inequality for Muslim women in Mauritius is the absence of a clear legal framework that protects rights in the context of religious marriages. The report highlights this legal ambiguity and key resulting inequalities that harm Muslim Mauritian women and in turn damage families, communities, and society as a whole. The report encourages the State of Mauritius to leverage its robust framework of diversity and inclusion to promote equality for Muslim women and take concrete steps to ensure all women in Mauritius enjoy full legal protection.

The report will be considered by the CEDAW Committee in its Constructive Dialogue with the Government of Mauritius. Today, Monday, October 29, the IHRC team has joined Musawah in Geneva, Switzerland, where the session and associated Committee briefings are now taking place. Tune in to the #CEDAW71 Constructive Dialogue starting tomorrow (10:00 a.m. – 5:30 p.m. CET) and follow Musawah on Twitter for updates. Watch live at http://webtv.un.org/…/71st-session-committee-…/5723840293001. Please join us for a talk with Melissa Hooper, Director of Human Rights and Civil Society at Human Rights First, on Russia’s global efforts to promote “traditional values” that curtail the rights of LGBTQ people. This agenda is demonstrated in the “gay propaganda law” which penalizes those who share ideas about the equal value of same-sex relationships to children. In addition, Russia has advocated for U.N. resolutions, and supported legislatures in other countries to pass laws that favor “family values” over the human rights of LGBTQ, women, and others. This talk will also consider how U.S. actors are supporting Russia to advance these policies.

This event is co-sponsored by HLS Advocates for Human Rights, the Harvard Human Rights Journal, and HLS Lambda.

Tomorrow, April 13: The experience of a Judge at the European Court of Human Rights 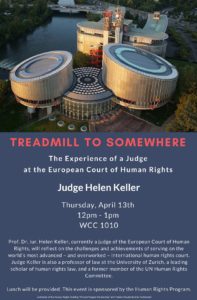 “The treadmill to somewhere: The experience of a Judge at the European Court of Human Rights”

Please join us for a talk by Prof. Dr. iur. Helen Keller, currently a judge of the European Court of Human Rights, who will reflect on the challenges and achievements of serving on the world’s most advanced – and overworked – international human rights court. Judge Keller is also a professor of law at the University of Zurich, a leading scholar of human rights law, and a former member of the UN Human Rights Committee. 
Please join us for a screening of “Private Revolutions: Young, Female, Egyptian”, a documentary that chronicles over two years the lives of four young Egyptian women from various social backgrounds who are fighting for their rights and for change after the revolution. The director of the film, Alexandria Schneider, will join us afterwards for a discussion and Q & A.

The screening is the last in a film series presented by Islamic Legal Studies: Law and Social Change about women, rights, and activism in the Muslim world. HRP is co-sponsoring the series, which showcases films that highlight women’s struggles, conflicts, and triumphs across the region.

Because we believe that every month should include an International Women’s Day, we’re celebrating it again this month by sharing videos from last month’s official celebration at HLS. Either that, or we got caught up in other things around the Human Rights Program and neglected to post these videos in a timely manner.

Thanks to the powerhouse women below- Yee Htun, Clinical Advocacy Fellow; Anna Crowe, Clinical Instructor; and Emily Nagisa Keehn, Assistant Director of the Academic Program- for organizing this event that drew more than 100 students, staff and faculty to Belinda Hall on March 8. Thanks also to the women who stood in front of that community and inspired and energized us with their words. And thanks finally to all the women we know- and the billions we do not- who have pushed for change, in whatever way they can, so that we are stronger and more secure and ready to push for MORE. 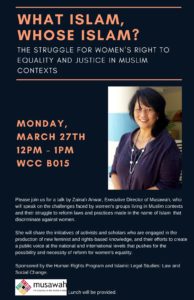 Tomorrow, March 23: A film screening and discussion of Palestinian women living under the occupation


Please join us for a screening of “Speed Sisters,” followed by a panel on Palestinian women living under the occupation. This is part of an ongoing film series sponsored by Islamic Legal Studies: Law and Social Change on women, rights and activism in the Muslim world.

The Speed Sisters are the first all-woman race car driving team in the Middle East. Grabbing headlines and turning heads at improvised tracks across the West Bank, these five women have sped their way into the heart of the gritty, male-dominated Palestinian street car-racing scene. Independent, determined and always on the move, they have deftly charted their own course through the pressures of social expectations, family dynamics, community politics and an ongoing Israeli military occupation.

Following the screening, our panelists Zena Agha, Rana Wahbe, and Nour Soubani will take a closer look at the complexities and vulnerabilities of Palestinian women’s lives under the Israeli occupation, offering personal perspectives and first-hand accounts.